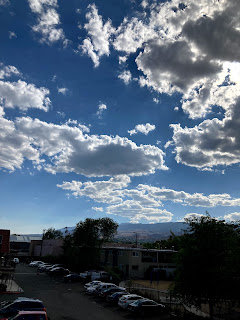 I really love these kind of clouds. this was taken mid day but that night we had a little rainfall but it evaporated really fast. Not this last little storm. It sprinkled really hard yesterday but it started raining really hard during the night and it brought in some cold weather. I love it after the hot summer that we have had.

Well the cataract surgery is over and I won't say that it was painless because I actually woke up when they were putting the stent in my eye. It Hurt and then the drops that they prescribe (antibiotic) on a fresh incision BURNS like Hell. but thankfully that became less and less as the days passed.

Steve yes they give you this plastic guard to wear at night that has tiny holes in it so that the eye can breath but it was bulky and uncomfortable to wear so I just used my regular cone shaped eye patch the first night and it was fine. More comfortable at least.

We are enjoying the cooler weather and the rain. It has been so hot and dry and we are hoping that the rain finishes putting out the rest of the wildfires. I haven't actually heard the fire report but I really haven't been able to see with my eyes but the other day was really clear but yesterday was smokey until the clouds moved in.

Matt got to come home night before last and he left yesterday morning but something was wrong with his truck and a light kept coming on so dispatch said to bring it back to Idaho so he came back home and left again this morning. I got up just before he left and had a chance to talk to him before he had to leave.  He and Courtney went out last night. At dinner last night I told Matt that she needed to get out of the house for a few hours and go and have fun so that is what he did. We were in bed when they got home and I am not sure what time that was but I am glad that they went out and she looks less stressed and more relaxed today.

I tried to lay down for a little while but I kept getting interrupted so I just got up and forgot that I started my blog but that got interrupted as well.

The most important thing happened I guess that it was 2 important things. Alex had a visit with his mom yesterday and he left his phone in his social workers car and she was supposed to have dropped it off at 9:00 this morning but there was a bad accident on her way and she called to say that she would be at least an hour late getting here. The kids were up by this time. Then around 11 or so she called Courtney to say that she had to turn around and go back to her office for a meeting and it would be 2:30 before she would be here and at 2:30 right on the dot she arrived.

The next thing that happened was important. My eye doctor's office called with a reminder of a follow up appointment for Tuesday October 12th and that date had me getting up from my almost nap and come and check my calendar and sure enough I had 2 appointments that day so it was easier to reschedule one and call my transportation office and change the time and destination and I just thought that it would be easier but actually it took a little longer than I had anticipated. There computer systems has been down for most of the day and they were just getting back online so by the time that was done it was too late for a nap so I just stayed up.

I am sorry that I have not  been online, I have been so sick with stomach issues. I am having horrible nausea. I have  not been feeling well for at least a week and it has not gotten any better. Poor Courtney has been burning the candle at both ends and I am so very sorry I have not been able to help her,

We had another mandatory pest control spray and this is really getting to be too much to deal with. We had to pack up everything and move everything 3 feet from the wall yet again. With me throwing up and not able to help her as much she is she is so exhausted and then Matt came home last night so she had to go and get him. She left me sleeping and fixed dinner. She woke me up right before leaving and I was able to finish the meal but I went right back to bed as soon as soon as they got back.

I am going to go ahead and finish this and hope to be back soon. I am still feeling weak and very weak. Hugs to all. BB

Thankfully We Are Having Some Cooler Weather 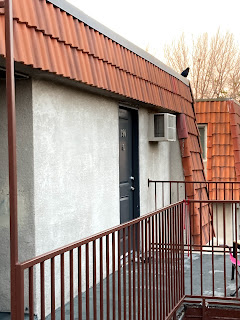 My little pet bratty bird he is gathering his courage to come to me. He got spooked earlier by the neighbors next door. They were leaving and he refused to come closer so I went back into the house and got him a couple of Chex Mix cereal and sure enough he was in his usual spot and loudly letting me know that he was there lol.
Hello,
It is the eve of my cataract surgery and I am just a tad bit nervous. They are doing this procedure to help slow my glaucoma and that is they are putting a stent in my eye to help drain the fluid and they said that my eye is going to feel like there is something in it... (Ya Think)? But DO NOT RUB MY EYE!!!! and after the fun of having my right eye done tomorrow I get to do it all over again on October 28th.... Well at least I will have it done 2 days before Celeste's birthday.
Gosh I can't believe that my little girl is going to be 7 years old! I remember the day that she was born. Her mama called me and said Hey turn your data on... that was back in the day when I was watching my data until we had our internet set up. We had just moved from Jon and Nathan's upstairs unit to the one downstairs. I had just had my right kidney removed so I didn't have to do anything with the move. Not even sit and unpack a box at the time. I knew she had my little girl and that is just what I said... "You had the baby!" She said "Turn on your data" and by that time I was opening my messages and seeing the first photo of our baby girl. She is still as gorgeous now as she was then.
And this child is super super smart. She really blows me away with some of the things that she says to me. I didn't feel well the other day and I didn't work with her in her workbook but around 3 or so she asked if we could do some school work and I told her sure but I wasn't up to helping her with all of her school work and I told her that she had to pick the subject. She chose math and we did 5 pages front and back. She breezed right thru it so that is good. I will be glad when she is done with this workbook because I think that she needs to be challenged just a little bit more.
I am sorry that I am having to type and run but the kids are in the shower and getting ready for bed and I have to get all of my paperwork done and in my surgery packet and Courtney and I have to finish the last page together and after that I am going to go and lay down. I am not anticipating getting any sleep but I am going to try.
Big hugs to all and I will talk/type with you guys later. Stay safe and stay well and just a reminder... Get Your Flu Shot! It is that time of year and it is a health reminder that we can all use. Also Ladies... If you haven't... Remember that October is Breast Cancer Awareness month so girls go get your mammograms and keep those Ta Ta's safe as well... So go and get the big SQUEEZ Please! Stay safe until next time... BB
- October 03, 2021 2 comments: