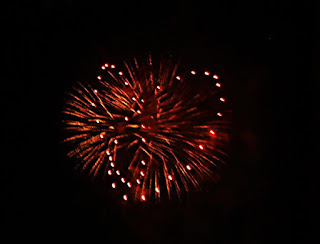 Miss Edna, Audrey and I in Florida one night watching the Walt Disney Fireworks display. It was always so beautiful to watch and the company was always loving and filled with awe.

Happy Friday! I know that it is now Saturday in many parts of the world, and I am glad that your weekend has already begun well past Friday night!

I had good news from 2 of my doctors today. My endocrinologist informed me that my A1C has come down!

Whooo Whooo.  I have worked hard to bring it down and was so excited to hear that news along with the news that my insulin was also decreased and then at my second appointment, my medication was switched back to a different kind which will hopefully bring me some much-needed pain relief. So even though I was tired when I finally got home, I had a great productive day.

I had planned to come home and watch The Addams Family, Wednesday on Netflix, but I was just too tired so I will have a Netflix Saturday and watch it. I hear it is funny and a cross between Sabrina and Harry Potter so I am sure I will enjoy watching it.

Other than that, I really have no plans to do much of anything. Just have a binge-watching weekend and cuddling up with Foxy. It is supposed to be blustery and cold with drizzle. A perfect day to hibernate under the covers with a snuggle bunny. Foxy is a great companion who loves to cuddle as much as I do.

So I decided that I would write about my promise that I had mentioned in my last post. So here is a bit of my back story.

In 1998 I had gone to work in a candy factory. I had a great job. I was called a runner. My job started in one station, where I would weigh candy and place in a small white bag that was sent down to a group of people that attached labels so the bags of candy could be sold in our gift store.

After that I would go to a different station lasting from 10 minutes to a half hour so others could go to break, then I would go and relieve another station and so on.

I was on my feet 10 hours a day but I was constantly moving so I was never bored. My last station of the day was a hard one. I loaded pallets with boxes of candy. Each box depending upon the pallet was between 10 and 20 pounds. So, it was a constant movement.

I was also beginning to hurt in my back, but I thought that it was just because I wasn't used to the strenuous work I was doing. I had recently started the last station a few weeks before. I worked Monday-Thursday.

My set of days off I was not feeling my best but I just figured I was tired and tried to rest as much as possible. On Sunday I figured I might have a UTI or something and decided I would keep an eye out.

Monday morning I was in a whole heck of a lot of pain and I called in, fully expecting to call my doctor for an appointment. I went back to bed and Karyn got the kids off to school and I slept.

I don't know how I got back to my bed, but I called the school and had Karyn to come home immediately. Well, she ended up running home because our car wouldn't start, naturally. It was on its last leg anyway and finally died in a heap of crap.

She stayed with me until a friend arrived to carry me to the ER and then went back to school and to get the other kids when school let out.

At the ER they gave me a shot and said that I had a UTI and said that if a UTI was really bad then yes, there could be blood. I went home and at some point I was sobbing and I called a different friend who would get off work around 10:00pm from Walmart and she agreed to come to my house when she got off work and take me back to the ER.

The same doctor was still there, and he told me "Mrs. Reed you're just going to have to give the antibiotics a chance to work."

Something told me that this was not just a UTI. I remember asking him when his replacement came on duty and he said something like in a hour and I told him I would just wait to see his replacement.

His replacement agreed with me that it could be more and he called in a kidney specialist and they ran some tests and he said for me to be in his office the next day.

When your car is broken down and you have no wheels, that the town you need to be in the next day with a hospital is 30 miles away, that is when one is grateful to great friends. Ones who took off work to get me to that kidney doctor's office!

Long story short and many many tests and treatments later the end result is that I had a kidney stone.

Not just any kidney stone, but one the size of a Grapefruit! No, I am not lying, or exaggerating. I am telling you the truth. It had filled the entire kidney and even into the crevices of the kidney. I cannot think of the name of those crevices at the moment. Poles I think that they called them, but I am not sure. They explained to me that like rock candy, the stones would start out small and as others came along, they would adhere and just continue to grow until all spaces was filled.

I had many procedures, and once they decided what kind of surgery I would have, they had to insert a series of tubes into the kidney so they could get the instruments into the kidney.

They made a mistake on the amount of anesthesia to give me because the entire thing was supposed to only last a half hour or so, but I am not really sure of the problems they had, only that it took longer, and they had not planned for more anesthesia, and they had to keep working and when I would start screaming, they would give me just enough to knock me back out again. I remember the screaming parts!

They ended up keeping me overnight and I remember I woke up freezing cold and shivering so bad that I couldn't even press the call button. I think that I called out but I just remember this beautiful woman coming in and she said I had a fever and she brought me warm blankets and stayed with me, wiping my head with a washcloth and I remember her talking to me and staying with me. I recall telling her how much she reminded me of my friend Cyndy and I had lost contact with her and I really missed my friend.

We talked of many things, about how guilty I felt from keeping her from her other patients and she telling me that she was right where she needed to be, and we talked about happiness.

I made a promise to myself that night. If I lived thru this ordeal that I would be happy. I would do my best to always be happy or as happy as I possibly could be.

Now I don't know if you believe in angels or other worldly things or even if things that you cannot explain, but I remember telling the woman that she was my angel.

I asked about her the next day. I wanted to know her name so that I could send her a thank you note. No one knew who I was talking about. Several people came to me asking for descriptions of her, what she was wearing, how tall she was, what color was her hair?

According to staff, there had been no one there matching her description. No woman with long blonde hair, no nurse on duty that gave me medicine or tended a fever I didn't have. No warm blankets or kindness from anyone other than the night staff. So who was she?

Everyone said I had dreamed of her. They said I had experienced a difficult procedure and it wasn't unusual to hallucinate or imagine things. In other words I was either crazy or going crazy. But I know what I saw that night. I didn't imagine her. I remember telling her that I was going to live my best life and be happy. I remember the hug, the warmth of her hands. I can still feel the hug. I didn't imagine her.

I had lost touch with Cyndy when she moved back to Ohio with her husband. I had no way of getting in touch with her. I had tried every avenue I had back then but nothing panned out.

About 3 weeks after my big surgery to remove part of the kidney stone, I was trying to get up and move around. I remember making it to the hallway where I had my computer and was sitting there when the phone rang. It was my long lost friend.

Cyndy and I have discussed this several times and around the same time I had met my angel, Cindy had tried to get in touch with me but couldn't remember my family, sister's names and such but she was praying one night and said that she remembers praying, I miss my friend and had an overwhelming urge to just try again. She got out of bed and went to the computer, and it was like a gold mine of information just came to her.

She called my husband's mother the next day who told her about my surgery and gave her my phone number. We have never lost touch since then.

I remember telling the lady that was with me that night, "I miss my friend."

She said to me "I'm sure she misses you too. You will be reunited. Just wait and see."

So my promise holds so much meaning for me, not just in choosing to be happy, but believing that even if I cannot explain some things, things that are unexplained can happen.

Good night and take care of yourself and be safe and be kind. BB