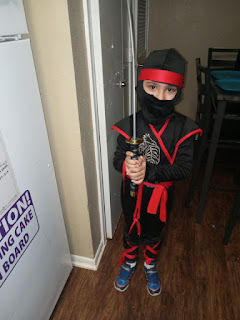 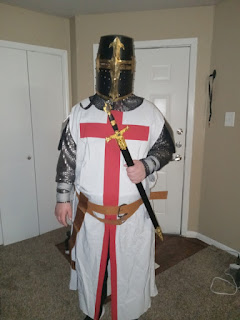 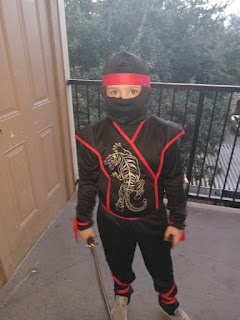 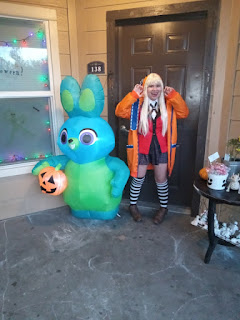 I was locked out of my blog and so I started a new one and then I found a way back into my original blog, how about that? Crazy isn't it how things can be?

So, I know that this post is as old as dirt, but it was so frustrating to be locked out. Every time I tried to get back in, it kept asking for my password. I kept putting it in, but it would not accept it, especially when I signed out and then signed back in.

I honestly do not know what I did differently this time but when I signed in, it took it and here I am. Finally!

So, I planned to spend Halloween with my grandkids, but their dad had a stomach bug, and I just didn't want to chance it.

I had an alright Halloween. I went to my doctor and had some specialty labs done for my kidney specialist and while I was there, I got my jab! I got my flu shot and didn't have any kind of reaction.

It is always iffy with me when getting my flu shot. One year my injection site swelled up the size of a baseball and I could barely lift my arm and I was working in a hunting lodge and had to use my arm to scrub the walls of the showers/tubs.

Then the next year, I went home feeling fine and a few hours later I felt as if I had been hit by a train. Everyone swore that it was the flu shot, but I knew better.

I was exposed to the flu before I had the shot, and it was just a coincidence. Well, that is my theory, and I am sticking to it. I know that the flu shot isn't live anymore, but I really got tired of trying to explain that, so I did what I do best and that is just shut up and nod my head yes or no. UGH!

On the way home, my Uber driver did his best to educate me on politics. One thing for sure is he should be on the next campaign trail. He was adamant about why our country is the way our country is and why we are all idiots. I wisely did not enter into this conversation and tried several times to change the subject but was thankful when we reached our apartment complex and directed him to my apartment and then wished him a great day and escaped!

I do not like engaging in politics, religion or other controversial topics.  It is better not to do so in my opinion, it can keep from having an argument and worse. I don't want to trigger a very serious argument that could escalate. Isn't that how stabbings and shootings happen? It happens for things less than politics, so I just think that not engaging is best.

It's cold here today. We have had a cold spell and have even had a few nights below freezing. The days have been sunny with temps up into the 50's and it has been nice.

It was funny watching the kids, (I call them kids, teens and 20 something's) come to play volleyball. We have a sand volleyball court, and we had some really nice Indian Summer days in the 70 and 80's and no one played volleyball. Then it rained for 2 days straight and as soon as the rain stopped, that afternoon they came to play. Wearing shorts and hoodies! A couple of girls did have leggings on, but for the most part just shorts.

Yesterday was in the 50's and they all were wearing shorts and t-shirts and it was cold out. I guess they were staying warm, but they didn't hang out long at the court. They left within the hour. Some were huddled together and then they grabbed their volleyballs and left! Gee I wonder if they got cold? LOL.

Right now, it is 43F and our high is 54F with the low dipping down to 38F. So, it is nippy and around 3pm it will be nice until the sun starts going down. It would be a great time to play ball, but school is still in session, so the kids don't usually start showing up around our complex until around 4 or so in the afternoon. But when the others show up to play or practice volleyball, it is usually around 5pm. We have lights so they can see.

Jonathan turned on our heat last night. I took Foxy out this morning, and she didn't linger. She went out and ran back to the door to be let in. It took me longer to put my robe on and let her out than it did for her to be out Haha.

Well Thanksgiving is right around the corner. It is going to be a time for many to gather and be Thankful for the Blessings in their lives. I hope that if you know someone who doesn't have a place to go, then offer them a place within your circle of family and friends. It doesn't take much to set an extra place. Even if that place is on the sofa or as in my large family, a place on the floor! The main thing is to include someone who may be alone.

I hope that everyone has a Blessed Day! Be safe and Be Kind and remember if your cold, so is your pet, so bring them inside. BB